We are small time organic Farmers.  We have two tractors but not much else in the way of heavy equipment.  The Farmer tends to his vegetables one row at a time, eschewing chemical spray for old fashioned Weed Pulling.   I hand milk  Elsie the cow as well as the 10 goats currently in milk, preferring the intimacy that comes from sitting and talking and getting to know my girls.  I have a milking machine and it would save me a few minutes in a Too Busy Day but I would lose much!  The time spent milking gives me the opportunity to observe each of them....do Stella's hooves need to be trimmed? Has Dolly lost weight?  Is aging Daisy getting arthritic?   Farming is a very busy business.  Neither the Farmer nor I are afforded much in the way of leisure time, but we are gifted with a window into a funny world that many do not see.

There are meaningful and deliberate interactions between the species on Rosie Belle Farm.  1200 pound Elsie lumbers into the Dairy Barn for morning milking while five or more hungry chickens dance beneath her clumsy feet and pendulous udders.  They are all racing for the same destination....the Feed Trough.  Elsie is a Pastured Cow and only gets a bit of grain at milking time.  She is as gentle as she can be, making sure not to hurt any of the silly hens scattering under foot.  She eats quite contentedly alongside them, giving a gentle nudge with her massive head if one needs a bit of redirection.  Elsie seems to be aware of her powerful strength, for which I am grateful!


We had some new babies born on the Farm this week.  The little ones were born to Alien 2, a goat that has a reputation for being bossy and bad tempered.  She was a rather indifferent mother the first time around so I didn't have high hopes with her second freshening.  Happily, she could not be more devoted. 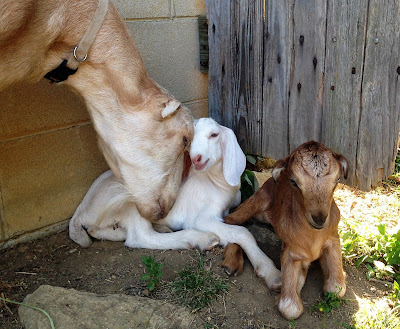 So much so, in fact, that she has been terrorizing poor Georgie, my youngest dog. Georgie came to us about a year ago...we spotted him racing down a rural highway, dragging a heavy chain attached to a too tight collar cinched around his neck.  The end of the chain was attached to a plastic milk container, filled with rocks and sand.  His tag was illegible and there was no microchip.  One of our old farmer friends said that he was "dressed for a drowning."  We took him home with us and he proceeded to pee on every wall in the house, apparently deciding that he was going to be the Alpha.  And so it is.....He is wickedly annoying to everyone but the Farmer and me, who find his antics adorable. Anywhoo...Georgie is the Farm Baby Ambassador. 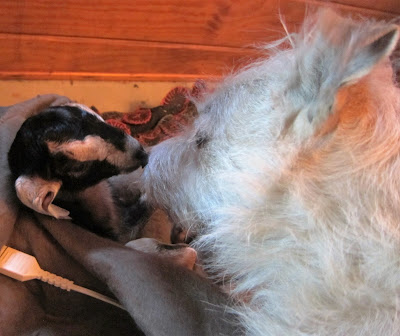 The little goat pictured at left was unable to walk when she was first born.  Georgie did not leave her side.  He was the nurturing Mom in her world.  She is now a healthy and happy member of the team.
There is not a baby that he does not mother and most of the Farm Moms accept his ministrations to their brood.  Not so Alien 2.  She goes ballistic every time he gets close to her little ones, which seems to make him ever more determined to get to them.  She will occasionally leave them for a bit of grazing time and Georgie makes his move.  He settles in with them for a snuggle and soon the fight begins.  Mom returns to the barnyard and he won't let her near her babies.  She head butts him, he snaps at her.  The foolishness continues until I call him into the house.  Same routine every day....they both seem to enjoy it.

The heat has finally come to Middle Tennessee and I am thrilled.  I am inspired to work in the yard and am currently building rock walls for the garden in the front yard.  Our first year on the Farm was spent dealing with critical infrastructure issues so it is lovely to concentrate on beautification projects!  Late afternoons in the garden mean that I want something fast and cool on the table....we have been enjoying cabbage salad quite a bit lately.  It is a No Mayo Coleslaw that I have dubbed The Best Coleslaw in the World.  Pretty big statement, I know, but I really believe it to be true.  It is a beautiful dish, with peppers that sparkle like little jewels and a dressing that is fresh, clean, and bright.

The Best Cole Slaw in The World 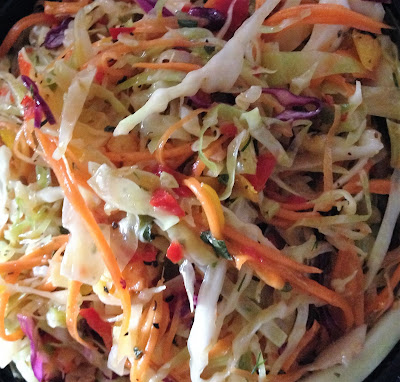